Coach trips and days out 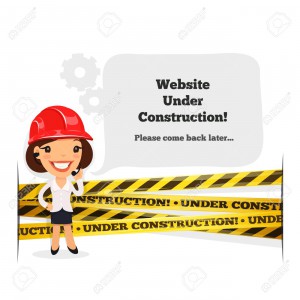 We like going out and about together at Whitley WI. Here are a few of our recent outings:

On 18th May 2016, Whitley WI invaded Lancaster. It was a wonderful trip organised by Ann Tolson, Ann Brock and Lorna Bettles.

The main event was a guided tour of the castle. Lancaster Castle dates from around 1150, and today it still forms part of The Queen’s Duchy of Lancaster estate. It has fascinating history including being a prison until 2011.

Eleanor provided this lovely report on the outing….

I would like to thank you for arranging the WI trip to Lancaster on Wednesday. 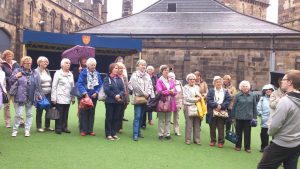 I thoroughly enjoyed the whole day. The guided tour of the castle buildings, courts and prison, was delivered with much knowledge and enthusiasm by the young guide, who gave us a wonderful insight into the history of the castle, from medieval times to this current day. The highlight of the morning was when we were locked into a prison cell, in pitch dark and naturally did what WI ladies do…. we sang Jerusalem!! That must be a first and I have to say ladies I thought we were remarkably in tune!  This must be one for Joan Blackshaw’s WI memoire!

From there on the only way was up, the morning rain dispersed and the sun shone as we all  made our various ways for some lunch and ‘free time’ to explore at leisure. My little group certainly made good use of this, making our way back to the coach at 3 pm for our visit to Williamson park, the site of the Ashton Memorial. Again this did not disappoint, the parklands were extensive, and to see the Ashton Memorial, (a landmark previously glimpsed many times in passing) up close was very impressive. The panoramic views out over Morecambe Bay and surrounds were splendid. Time then to wander around the butterfly house trying to get some good close up shots of those spectacularly coloured specimens before they fluttered away.  On then to the meerkat enclosure where those cheeky little creatures seemed to be born to pose for the camera. Finally there was time for a much needed cup of tea before boarding the coach for our journey home.

I can’t believe I have driven past Lancaster on the motorway so many times and yet never ventured into the city, happily that is now rectified and I mean to return and explore some more.

I really appreciate the thought and effort that you have all put into arranging the outing. Lorna, sorry you were not able to join us, I know you have played an integral part in the investigation and organisation of the venue and transport etc. Hope you can soon join us on some of the WI events arranged for future months.

I am sure I speak not only for myself but the other ladies on the trip in thanking you all very much for arranging such an enjoyable day for us all. 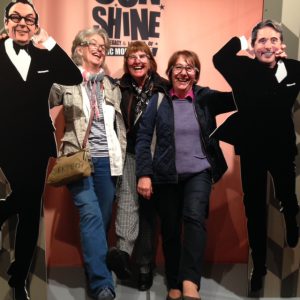 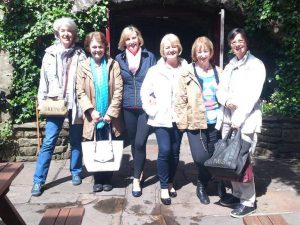 During the free time, some of our members visited the Lancaster Museum where they enjoyed the Morecambe and Wise exhibition.

Ann Stubbs , Anne Tolson and Anne Brock got into the spirit of things with Eric and Ernie. 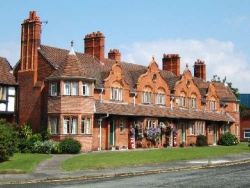 Port Sunlight and soap are part of Cheshire’s heritage and in August Whitley members found it was well worth a visit. Starting with a walk round the museum, they heard how this model garden village was built by “Soap King”, philanthropist William Hesketh Lever, with work starting in 1888. Having been given an insight into the working life and leisure of the Port Sunlight workers in the 19th and early 20th century, the visit continued with a coach tour round the village. The entertaining and knowledgeable guide described how the village was designed and created. With over 900 houses and eight principle buildings – and with the Arts and Crafts movement being much in evidence – it is enhanced by the magnificent gardens, now maintained by the Port Sunlight Trust. The visit ended with gifts of bars of Sunlight soap for everyone and members departed for the Bridge Inn and an evening of delicious food, wine and chatter. 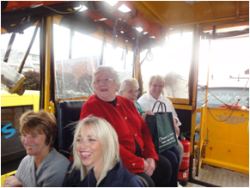 A very interesting and successful trip around Liverpool on the Duckmarine, followed by a meal at “What’s Cooking”, was organized by Ann O’Brien for thirty members. Having arrived at the dock area but still on terra firma, members boarded the Duckmarine, an amphibious vehicle dating from the Second World War. Very soon, with a shudder and a judder, they splashed down into the water and set off to see the sites of Liverpool dockland. The fascinating story of Liverpool’s waterside heritage was enlivened with a wonderful Liverpuddlian sense of humour and places of interest were pointed out and questions answered.
Back on dry land but still in the Duckmarine, the tour of the Liverpool area continued and members were amazed at the enormous regeneration schemes that have recently taken place and were delighted to see what a vibrant city Liverpool now is, thanks, in part, to its legacy as “Capital of Culture 2008”. Food plays an important part in an outing and an enjoyable meal followed the tour, after which some of the party departed to a nearby wine bar for further refreshment! Others wandered around the dock area.

Day out to Cholmondeley Castle 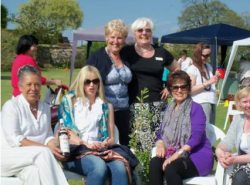 What a fantastic day! The weather was perfect as Whitley WI members joined over 1,300 other members and friends to celebrate the Federation’s 90th birthday in the grounds of Cholmondeley Castle. The sun shone the whole day and members enjoyed picnics by the lake and in the grounds and also listened to medieval music in front of the castle. There were games and Country Markets, Bucks Fizz, cake and tea on the lawn. Some energetic members even learned a French dance from the band! Others braved the heat and played croquet.

Cruise down the River Weaver 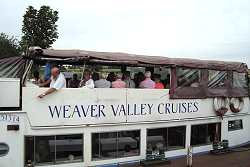 Our evening trip for August, this enjoyable outing took 60 of us down the river on a boat with a good supper and a licenced bar open for the whole voyage. We relaxed on the way down enjoying the scenery and a good chat, then on the way back we had a fascinating commentary on the many interesting sights around us such as the Graveyard, final resting place of over 60 canal “flats” scuttled when the salt traffic ended, or the coracle of the only licenced eel fisher on the river. Did you know the jellied eels famously eaten in the East End of London came from Cheshire? neither did we!

We had a glorious sunny day. Both visits were interesting and our guides were full of information. We visited the wildflower centre first – coffee on arrival, were shown round by Grant. Cowslips galore in bloom. We were impressed by the living wall, amongst other things, Grant said that since it had been built there had been more birds in the garden and even had a weasel living within the wall and that it was a haven and home for all kinds of insects, invertebrates etc. After the conducted tour we had lunch in the cafe and then back to the coach and onto the mounted Police centre.
There we were shown the indoor exercise arena, the outdoor menage where two officers were having tuition, we were then able to ask them questions. We were shown into one of the police horseboxes, which could carry up to six horses, then on to the stable yard.

Dressed appropriately, our guides, a bargee and his wife and a visiting ‘lady from the local church mission’ told us what life was like living and working on our waterways. We learnt about how important it was to feed and care for your horse properly, that canal children often only went to school for five days a year and what leggers and toe-rags had to do for a living. We ducked down into a narrow boat and wondered how parents managed to live and bring up four children in a small area about ten metres long and five wide, we pressed monitor screens and lifted lids in the interactive display area of the recently refurbished and updated section of the museum and ended our visit with an enjoyable meal (always a highlight of our trips) in the museum café and a chance to do some shopping. All in all it was a very stimulating and interesting evening! 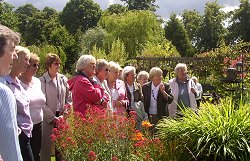 We car pooled ourselves over to the pretty village of Great Budworth for an enjoyable programme of activities. Beginning with tea and biscuits, we had a leisurely walk around the attractive gardens with the friendly owner Jean talking us through the various interesting plants and bedding schemes. There were hens, donkeys and some delightful ducks, as well as a small vineyard where Jean’s husband Peter told us about the art of the vine. The cookery demonstration in the marquee followed with some innovative yet simple dishes to make, the heavenly smell of the fruit chutney made us all feel hungry. After an excellent lunch we had a guided walk around the village and ancient church, and then a talk about Jean’s role as The Housekeeper in the TV Series An Edwardian House. Lovely day all round and it didnt rain!

A full day out with a coach there and back which also included a tour around one of the last potteries in Stoke. We had a delicious lunch with some excellent local cake to folllow, then went around the pottery with our own tour guide who answered all our questions. We were treated to a display of virtuoso creativity by a handsome young potter, and shown how create and paint exquisite little china flowers by one of the girls who used to work at the pottery. Then we split into two groups and one lot were taught how to paint in Clarice Cliffe style, while the other group learnt how to throw and emboss a clay pot. We found some unexpected talent in our WI and got to take our work home.