We like to get involved with community projects and campaigns as well as national ones. Here are some of the things we are doing. 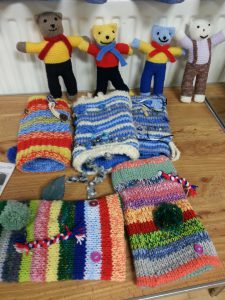 Joan Blackshaw and Pat Gaskell have started a knitting project; they plan that we knit for people with dementia. 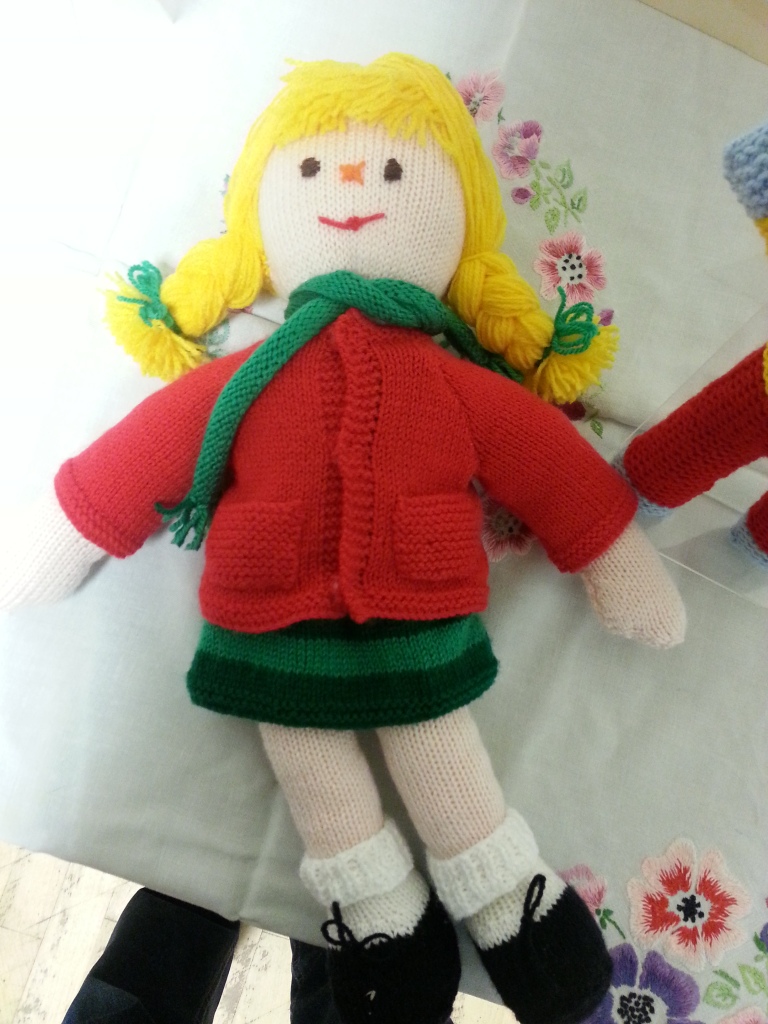 Susan Lynch knitted a doll which we sold for £10 to Virginia Butterworth.

With the proceeds Pat and Joan bought wool for the project.

Some of our members have now started knitting teddies, pandas and bunnies and at our May 11th project meeting patterns were swapped and discussed.

Here are links to the patterns that we are using at the moment that you can download:

Susan Burtonwood is already hooked. Here’s what she says:

I have a confession to make, I’ve got the ‘knitting bug’. I’ve never really been a knitter but I thought I’d better make an effort and have a g 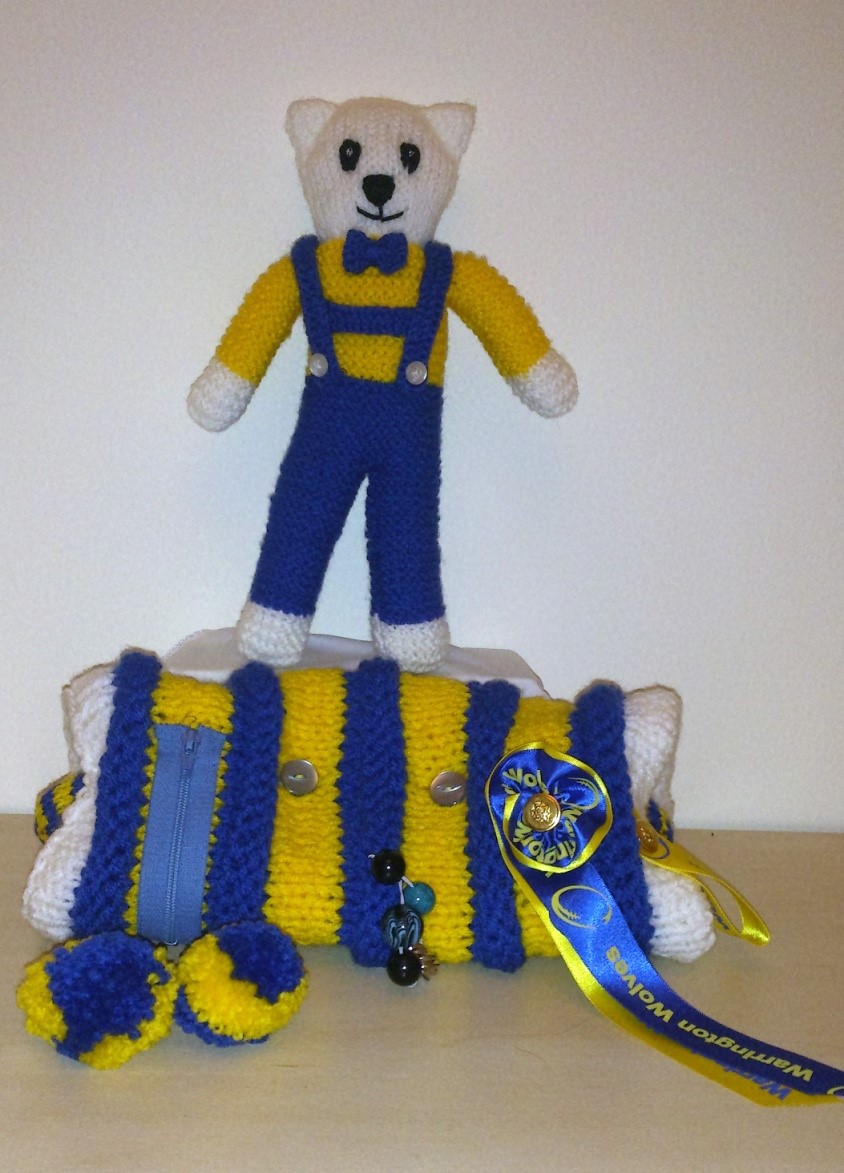 o at making a Twiddle Muff. I made a ‘girly’ one first, you know pastels and flowers etc., but then I thought about making one for the men.  I got a bit carried away with my Warrington Wolves effort, with zips and beads, pom poms and rugby balls and decided to make a mascot as well, I’ve called him WOOLLY (obviously).  They were so easy to do; I’m going to make a ‘girly’ teddy next.

If you’ve not made a muff or teddy yet, why not have a go? However; a word of caution – you may catch ‘The Knitting Bug’ but you will certainly brighten the life of a dementia sufferer.

Patterns for the twiddle muffs are on the internet, google twiddle muffs, or contact Lorna Bettles or Pat Gaskell or pick one up at next WI meeting along with a Teddy pattern.

The object was to encourage the planting of bee friendly plants. In 2010 speakers and bee keepers enlightened the Whitley people about bees and bee friendly plants BUDDLEIA, LAVENDER, FOXGLOVES, AQUILEGIA, POTENTILLA, PULMINARIA  SEDUM”RUBY GLOW” SINGLE DAHLIAS and ALDERBUCKTHORN to name but a few….

5 years later at WI MARCH 2016 meeting it was recorded only 9 people had visited the Bee Garden in the last year — year 2015.

Joan Blackshaw President visited the Bee Garden twice recently in March and reported to the members that the garden needs maintenance from us WI members, or we should give back the land to the WHITLEY COUNCIL. She also said ” Gardeners today want to use weed killer which is not compatible with bees”. This was agreed to by the WI Committee at their last meeting.

Joan said she would be at the Bee Garden at 10am Wednesday 13th APRIL to tidy, trim bushes etc., and she would like members to join her in maintaining the garden on that day and the rest of this spring

Joan said the committee can then review the matter of ” What are we going to do with the Bee Garden”  in MAY 2016. Joan thanked members for listening and said ” I hope to see you there”

Since September 2007 Whitley WI has been running a project in conjunction with Whitley Village School called Seed To Saucepan. The scheme follows the theme of links between things. Between the seeds and the growth of flowers, fruits and vegetables, between the produce and the table, between flowers and decorative items and between the WI and the children.

Whitley WI EcoTeam was a group of eight members who represented their households. We met once a month for four months to learn how our daily actions affect climate change. Discussions included water, energy, waste, transport and shopping. The EcoTeams shared ideas and worked together to learn how to make simple yet effective changes to their lifestyles to become more environmentally friendly and save money.

Whitley Parish Council produced a simple little booklet a few years ago which listed the phone numbers of everyone in the village, plus handly local information. People have always found it very useful but it had got out of date so we offered our services to the council and a team of us went knocking on doors to get the up to date information. The book was reprinted with the updated information and distributed to everyone in the village by the members.

In support of our hard-pressed British dairy Farmers the National Federation launched a series of debates to try and bring the issues to the attention of more people. Whitley WI hosted a debate, the audience included WI members, farmers and the farming community, landowners, councillors, clergy, small businesses and the press and the event highlighted the many challenges facing the British dairy industry. The profits of both processors and retailers were discussed and data presented showed that most farmers are now being paid less for their milk than it costs to produce whilst returns for the retailer had significantly increased over the past 8 years as had those for the processer.